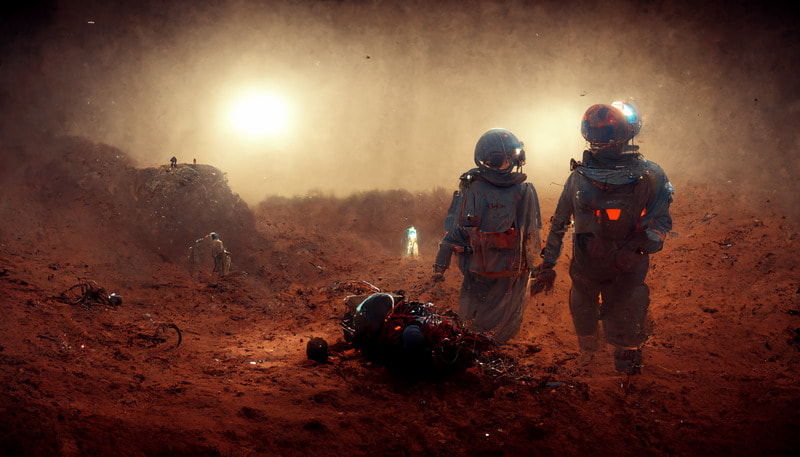 John was feeling emotional. As NASA’s chief engineer, he knew that the Mars rover, Opportunity, was coming to the end of its life. Having worked on the science project for twenty years, he knew the plucky little robot was nearly ready to shut down permanently.

He watched his computer terminal as the last couple of messages were transmitted by the rover’s UHF antenna and received by the NASA Deep Space Network.

The rover’s software engineers had programmed the firmware to add a countdown to its last ten messages, so John knew the end was near.

On average, the radio signals transmitted from the Mars rover took fourteen minutes and six seconds to travel the two hundred million kilometres of the dark void of space.

A few more staff started to drift into mission control to watch the last message, signal zero, being received. A bottle of champagne was on ice cooling so the team could celebrate the project’s success.

John choked back a tear when the final message from Opportunity flickered across his computer terminal.

After mingling with his colleagues and peers and discussing what they would all work on next, John returned to his terminal to wrap up for the night.

He was just about to switch off his monitor when he noticed his cursor change from the default flat blinking line to the alternating vertical and horizontal line, which denoted that another message was incoming.

He checked his watch. It had been about fourteen minutes since the last message had flickered across the screen.

“Hey Guys!” he shouted to the room; “looks like another message is coming in”.

“Not possible”, came the reply from Sophie, who was also familiar with the rover’s final message protocol. After a couple of seconds, the screen refreshed and showed the following message.

The screen continued scrolling and printing what looked like garbage across the screen.

“Did we capture the data?” asked Sophie.

John typed the command to list the contents of the messages folder. Sure enough, the computer had created a file called signal-minus-one.dat. The size of the file was 1420 MB. The file indeed contained quite a lot of data. More than Opportunity could send in one transmission.

He tried to list the contents of the file to the screen. Again the gibberish scrolled across the screen.

“Sophie, what is this, Telemetry data?”

“Not sure, John, it looks scrambled to me. However, the data size is significant.”

“Well, fourteen twenty hertz is the frequency of Hydrogen, and as you know, SETI has used that frequency to search for extraterrestrial messages for decades as it falls within the water hole.”

“What. Are you implying this message is extraterrestrial in origin?”

“Well, no. But it seems a coincidence, and I’m pretty sure it’s not from our rover. This message could be of enormous significance. We need to form a working group to examine the message more thoroughly. Make sure you backup the data file to multiple places so we don’t lose the data.”

Sophie’s comments didn’t convince John. He still thought it was just a computer glitch. However, he ensured the computer had backed up the data to NASA’s archive system. He also uploaded copies to his personal Dropbox and Google Drive accounts, breaking company policy.

“It’s getting late now. Let’s reconvene tomorrow when we can bring some IT and data analysis specialists in to help.” Sophie said as she picked up her coat and bag to leave for the night.