Re-learning to play the cornet after a thirty year break

Towards the end of 2016 I visited Beamish, the open air museum (well worth a visit). In the Hetton silver band hall in the pit village a brass band had brought several sample instruments which you could have a go on. I was curious to see if I could get any sound out of the cornet they had brought. Although it had been thirty years since I last played I did manage to get a half decent tone out of the instrument.

I then tried to sit and read a piece of music that was available. I was surprised find that I could read it quite well and managed to perform a fairly respectable rendition of “Joy to the world”. One of the band members said I should take it up again, as he’d had a gap of over twenty years before returning to playing. 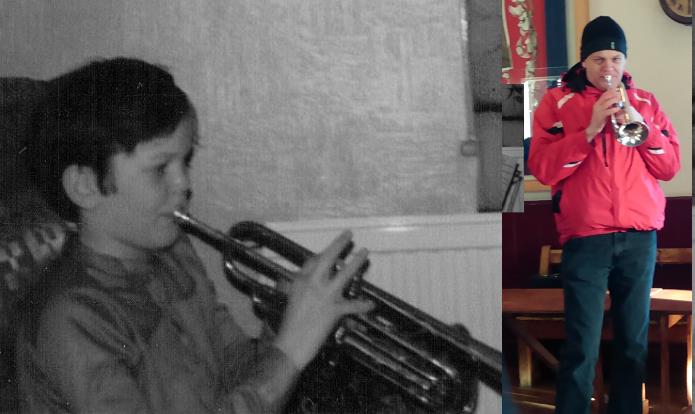 I spent a couple of months deciding if I should take it up again. It was important that I was honest with myself about dedicating several hours a week to practising and that the whole family was happy to endure my early practice sessions. I also wanted to set a couple of goals of what I wanted to achieve by the end of the year. The main goal was to join a band and be playing 3rd cornet parts.

Two and half years on

Playing in the Whit Friday contests is a surreal experience as most times you’re stood in a field (getting wet) and playing to a judge who sits in a caravan. This is band playing the last contest of day, we’d done six already. This was around 11pm, and the piece is called Caractacus

This November the band celebrated its 125th year. We held a special charity concert in celebration. Here are a couple of pieces.